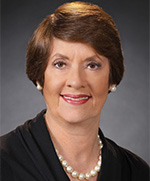 Kay Bivens was born and reared in Slaton, Texas where she graduated from Slaton High School. She continued her studies and earned a Bachelor of Science degree in Home Economics at Texas Tech University. After college graduation, Kay married Robert T. “Bob” Bivens. They have a son, Reece Bivens, a daughter and son-in-law, Missy and Jay Floyd, and two granddaughters, Taylor and Addison Floyd. Bob and Kay have two cats and one dog that rule their household.

The Bivens family moved to Midland from Lubbock in February 1980, and have loved every minute of living in this great area. After a nine-year career with Tom Brown, Inc. Kay accepted the Campaign Director position with United Way of Midland where she served seven years. In January 1996, she continued as a professional fundraiser when she became the Director of Institutional Advancement at The University of Texas of the Permian Basin. This enabled her to make many new friends in Odessa and continue her association with many old colleagues in Midland. She retired from The University after 15 years in that position.

In September 2011, Kay launched her new career at Legacy Real Estate and feels privileged to be part of this great organization of professionals. She loves working with her clients and is dedicated to providing them with her expertise and accessibility, regardless of whether they are buying or selling a home.

Bob and Kay are members of First Baptist Church where she served on the Arise and Build Capital Campaign Committee. She has served on the boards of many local organizations including the Midland-Odessa Symphony & Chorale, the Pilot Club, Safe Place, and Casa de Amigos. Her current affiliations are with the Midland Rotary Club, Executive Women of Midland, the Casa de Amigos Endowment Board and the Life Center Board of Directors.